BW Social Affordable Housing, part of The Braidwater Group, is delighted to announce the beneficiaries of its charitable donation in line with the commencement of construction of the H1B site in Skeoge. 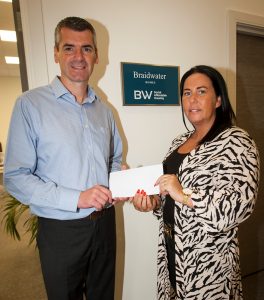 The first recipient is Glenabbey Community Association (GCA). Established in April 2017, GCA is a community based / resident support organisation that was formed to primarily service the needs of residents from Glenabbey and the surrounding Skeoge area of Derry City. Set up, managed, and supported by local residents, GCA is keen to support and improve the economic, educational, social, community, environmental and health well being of all the residents.

The second recipient is the well-known and used Playtrail. With an aim to provide an inclusive approach to play and outdoor learning at its Playtrail site, there is also provision for young adults with learning disabilities at ‘The Hub’ for Day opportunity & social provision. Wider services are also utilised by a cross section of organisations, both statutory and voluntary, as well as many youth clubs and schools. The Playtrail facility is also open to the wider community outside of school hours, including most holiday periods and it hosts a year long programme of activities. 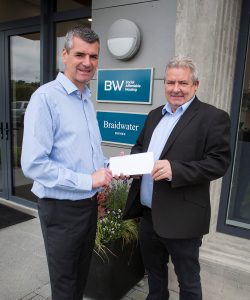 The third recipient is Studio 2 at Greater Shantallow Community Arts (GSCA). Formed in 1999, GSCA is a dedicated community arts charity that is passionate about using the transformative power of the arts to make a positive impact on people’s lives, supporting the creation of united caring communities that deliver equality of opportunity for all citizens.

Darren Farnan, marketing manager of The Braidwater Group, said: “The donations link in with the Braidwater Group’s yearly programme of working with local charities and sporting organisations, in line with our commitment to support the communities we operate in.

‘’We invited local charities and sporting organisations to submit applications for funding and are delighted to be able to offer financial support to these three worthwhile community organisations. As a company, we are proud to be part of the local community and pleased to be in a position to offer support.’’